EARLY MEMORIES OF THE FARM
By Frances West

I was raised during the Great Depression and although my family was very poor I was a happy child. My first memories emerge from life on the farm which was about three miles from the town of Palouse. There was a magnificent barn on the property. People may not think of a barn as being something to remember, but this one was formerly a dairy barn and it was huge, almost scary, to me. In the evenings I would walk with my dad from the house to the barn, the kerosene lantern Dad carried casting spooky shadows as we walked along. The chicken house was close by the barn and sometimes I would carry an egg or two back to the house.  Once I broke the egg and carried it anyway, gooey and dripping in my hand.  My mom and the other adults laughed and teased me about this and I went to my bedroom and cried.  I had done my best. Children are very sensitive and I think adults forget that sometimes.
My baby sister Annabelle was born on this farm, helped into the world by a country doctor. My mother was very busy as farm wives were in those days and to give her a little freedom to do her many chores one of my favorite jobs was to hold and rock the baby and give her a bottle. I was very proud to be helping out.  Not only was this an exciting time but also this experience bonded me and my sister as she and I have remained close though the years.
We had a big collie dog that we called Old Red. I don’t know where the Old came from because he wasn’t old but he was my faithful friend. There was a great stand of evergreen trees around the house and I thought it was a forest.  I would take Old Red and we would have great adventures in those trees. Sometimes I would use him for a pillow and take a good nap.  Once my family thought I was lost because I didn’t answer when called. As it turned out I was having a good sleep. I got a few swats on my bottom for scaring everyone.  Old Red died when I was around 11 or so and I was very sad to lose my devoted friend.

Old Red and I 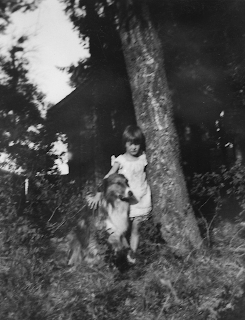 Myself, Old Red, and Annabelle: 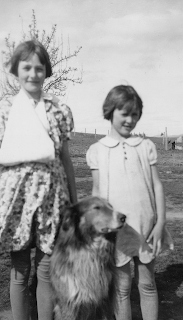 My father farmed, mostly for other farmers until the depression. After that he did whatever work he could find. He always worked hard.  We had all the regular farm animals: pigs, cows, chickens and horses. I only milked a cow for fun. (On a few occasions). My mother would not allow her girls to milk our two cows.  It was OK for the boys.  Perhaps it was because she had much of the responsibility of milking the cows herself and taking care of the milk was a whole story in itself.
There were times in the winter when Dad worked in the woods away from the farm that milking was then left to her, along with gardening and caring for the chickens and the children. My mother worked constantly. She had no modern conveniences. She made all of our clothes on an old treadle sewing machine, raised a huge garden which kept us in food over the winter, as she canned everything. For many years she washed our clothes on a washboard. In later years she did have a washing machine. We always knew our mother was home. That was where we wanted her. It was a good feeling of security.
My youngest sister and I did a lot of playing “let’s pretend”. We would dress up in old clothes and pretend all kinds of situations. One of the favorite things to do was to look over the mail order catalogs and pretend to order whatever we wanted.  Of course we never ordered anything.  After we had nearly worn the pages out we would cut out the pictures and make paper dolls.  It was very exciting when the mail man brought a new catalog. What was left of the old ones was then sent to the outhouse and used for toilet tissue.  Nothing was ever wasted. Do kids ever play “let’s pretend” anymore?
We lived in a number of houses, so I had lots of different views. Usually it was of a field or pasture, probably with grazing cows or other farm animals.  We always lived where we could have animals and a place for a large vegetable garden.  We were surrounded by rolling farmland hills of the Palouse Country. When I got older I finally decided that we moved so much probably because we were unable to pay the rent, although no one ever said as much. My dad loved to move around anyway, for whatever the reason.
The living room I remember the most was very sparse. It had a wood stove, a radio on a small table, a couple of straight backed chairs, a “library” table on top of which sat a quiet, pretty clock. There was also a rocking chair. No floor covering, just the wooden flooring. There was in an adjoining room a pump organ and an old phonograph and a sort of a couch which we called a lounge.
Our bedroom furnishings were basic; a bed and perhaps a dresser.  The walls were papered with newspapers. I would lie in bed and read them over and over.  At one point we lived in town and the house I remember the most was old and shabby and I didn’t like it. I was embarrassed to live there. It later burned to the ground with all the contents and our small dog. It burned on a Saturday evening and school was starting on Monday morning. I was entering the 8th grade. Our mother had all of our school clothes made so they burned. We had to start school with clothes given to us which were ugly and did not fit. It was a hard time for us children, a bad memory.
Some of the more pleasant memories are the smell of a wood fire, a kerosene lamp and bread baking in the oven. (My mother baked 7 loaves of bread twice a week) These memories evoke a feeling of worry free days, days of contentment and security, things we lose with our childhood when we become adults.
We children played outside nearly all summer. We played “made up” games and generally entertained ourselves.  In the evenings we had neighborhood games like run Sheep run, Kick the Can, and ball games. We were allowed, in those days to have big bonfires which served as our home base.  We would sometimes roast potatoes, or if we were lucky, wieners, over these fires. No one ever complained about the pollution of the fires, nor did we ever cause a problem from having them.
My parents had no time for summer games. They were busy raising a big garden, canning, caring for the animals.  Summer was a time to prepare for winter .A hayride was no big deal for me. My father had a beautiful team of white horses, Charlie and Jock, and a big wagon which was his main mode of transportation. Anything that needed to be hauled was hauled in that wagon. Of course when I was in junior high this was embarrassing for me because it was the only team and wagon in the area.  Everyone else it seemed had cars or trucks. So when I would hear those big horses clip clopping down the street I was shame faced, as someone teased me about it. At that age everything different was an embarrassment, and children can be very cruel. I would love to hear that clip clop again.


One day as a special treat I was allowed to ride to town in our old truck with my brother and Dad. My brother brought me an unheard of treat…an ice cream cone.  I relished it all the way home, hoping to share it with baby Annabelle but, alas, it melted before we got back but I had saved her the cone itself, a littlesoggy but she didn’t mind, so I was glad to be able to share my treat.
I was happiest on the farm, as I had not yet realized we were poor.  By the time I could attend school we had moved from this farm (one of many moves during my childhood).  At that time we began to attend town school and things were so much different in my childish thoughts.  I think that is when I first lost the magic of childhood.
Posted by sharono360 at 2:10 PM