Little is known about my maternal great grandfather, George Washington Payne. He was born in Warrensburg, Johnson County, Missouri on April 28, 1858 when James Buchanan was president. Two years later in 1860 Lincoln was elected president and the Civil War began in 1861, when George Washington Payne was two years old and ended when he was seven in the year 1865. His parents were John P. and Polly Barnet Payne. John was a farmer, horse trainer and blacksmith in Higginsville, Missouri for over 20 years. He ran sulkies (Sulkies are carts having 2 wheels, pulled by horses or dogs). George was one of 8 children and was a hard worker, but was said to be very high tempered.

A farmer by trade, George married his first wife Mary Elizabeth Collins on March 30, 1879 in the home of her father, Thomas Collins in Saline County, Missouri. Their first son, John Thomas was born February 17, 1880, followed by his younger brother William Joseph, who was born on October 25, 1881. Both boys were born in Warrensburg, Missouri.  Mary died on September 18, 1882 at the age of 22. One can only imagine the cause of death for someone so young. The boys were one year and two years old. There was also an adopted daughter, Rosa May, who was 12 at the time of Mary’s death. I am not sure of the circumstances of the adoption as her birthplace was in New York. It is speculated that she was a child of a family member.

In 1884, two years later after Mary's death George married Lucy Ann Sivils, my great grandmother who was 27 years old. She was born in Valley City, Missouri on January 18, 1857. George and Lucy had four daughters, Anna Belle, (my grandmother), Nellie May, Mary Frances, and Polly Lee. After the family migrated to Oregon on April 1st, 1896, George  ran a ranch with his brother Frank, raising 1,600 head of sheep. He homesteaded on a 160 acre wheat ranch with his family, building a house with 2 rooms on the property. George and Lucy's daughter Nellie said, "We had to haul water in barrels for the families use from the river." They later bought John V. O'Leary's property in Sherman County and built a house on that place.

George and Lucy both died in Grass Valley, Oregon. George lived a very hard life and died at the age of 46, leaving his wife to care for the children. A death notice in the Sherman County Observer explains the circumstances, "The death of G.W. Payne was not unexpected. He has long been a sufferer. His brother Frank and others of the family and friends, did all that was possible to restore his health."  He was even sent to the State Hospital several times the last year of his life due to memory loss and being unable to attend to his business.

Lucy was a widow for 13 years and died in July of 1917, after battling cancer for years. Her daughter Mary said that Lucy was asked by her doctor to stop working, due to the aggressive nature of the cancer, but Lucy refused, saying that working on the ranch was her livelihood. In her Will, she left all the proceeds of the wheat ranch to the care of their daughter Polly. Both George and Lucy and buried together in the Grass Valley I.O.O.F. Cemetery in Sherman County, Oregon. 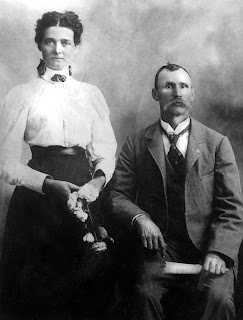 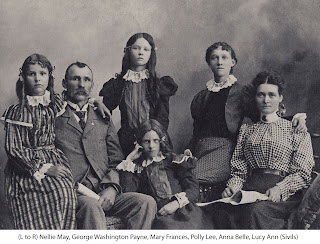 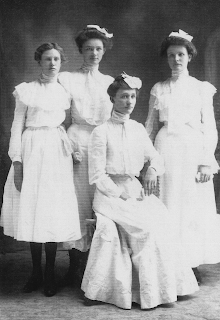 information complied and written by Sharon Ostrow and Dallin Millard
Posted by sharono360 at 6:12 PM