Seldom have the people of Palouse been so saddened as they were Sunday afternoon when the news made its way from home to home that Bessie West, the 18-year old daughter of Mr. and Mrs. George. E. West, pioneers of the Eden Valley district, was dead from a bullet wound, inflicted by a gun in her own hands. At first those who knew the girl best could not believe the sad story. Death occurred about 15 minutes after the shot was fired, the girl being unable to utter a word after the bullet had pierced her heart.
Bessie, who was a member of the freshman class in the Palouse high school, and president of the class, was living in the home of Mrs. Ada Oderlin and attending school.  There were several others rooming at the house, including Misses Teeple and Dunn, teachers in the Palouse school, and Dr. J. H. Bailey.  Sunday afternoon, about 2:45 Bessie went upstairs, and within a few minutes after the sound of a gunshot and of the falling body was heard.  She had gone into the room occupied by Miss Teeple and had secured a loaded revolver, which happened to be in a bureau drawer.  Miss Dunn, who was in the adjoining room, heard the noise, but did not know what it was.  She went to the door and saw the girl lying on the floor and believing she had fainted, hurried down stairs and called to the other in the house. There was no blood in evidence and at first Mrs. Oderlin, Dr. Bailey and Miss Steeple, who had hurried to her thought she had fallen in a faint and endeavored to revive her.  She was laid on a bed and the bullet wound was noticed by Mrs. Oderline, who had unloosened her clothing. Dr. E.K. Wolfe was called and arrived just before she drew her last breath.  The gun was found on a table in the room, near where she had fallen, and probably dropped from her hand as she fell.
While it was thought at first that the shooting was accidental, the finding of a note in the girl’s room a short time after the tragedy, led to the belief that the girl may have, in a fit of despondency, fired the gun intentionally. The note was brief and left no clue to the reason if the shooting was intentional.  It merely stated: “There is no comfort in sticking around here.” Bernice West, the oldest brother, who lives in town, was notified at once and the parents were called by telephone.
The parents, who are broken-hearted over the death of their only daughter, and the closest friends of the girl, are at a total loss to know of any reason why she should wish to die. Her life has in every way been a most exemplary one.  She wanted for nothing and her home life and her life in town and in school, seemed to lack nothing.  She had attended church Sunday morning and about noon had called her mother up over the telephone and talked with her for some time.  To those in the house she seemed to be as cheerful and happy as ever.  There can be no other explanation if the shooting was not accidental, that that she had become, for a moment, mentally irresponsible.
Bessie West was born at the farm home northwest of Palouse.  She attended the district school until she had completed the eighth grad and then came to Palouse to take her high school work.  Her home environment was of the best and she had always lived up to the home life. Being the only daughter and youngest child, she was the idol of her parents and of her three brothers, and her life seemed in every respect a happy one.


The funeral was held Tuesday afternoon from the Baptist church, the service being conducted by the Rev. C. R. Delephine, pastor of the church.  The high esteem in which the dead girl and the members of the family are held was evidenced by the crowd which packed the church, scores of neighbors driving over the almost impassable roads to attend the service. Practically all of the member s of the high school were in attendance. 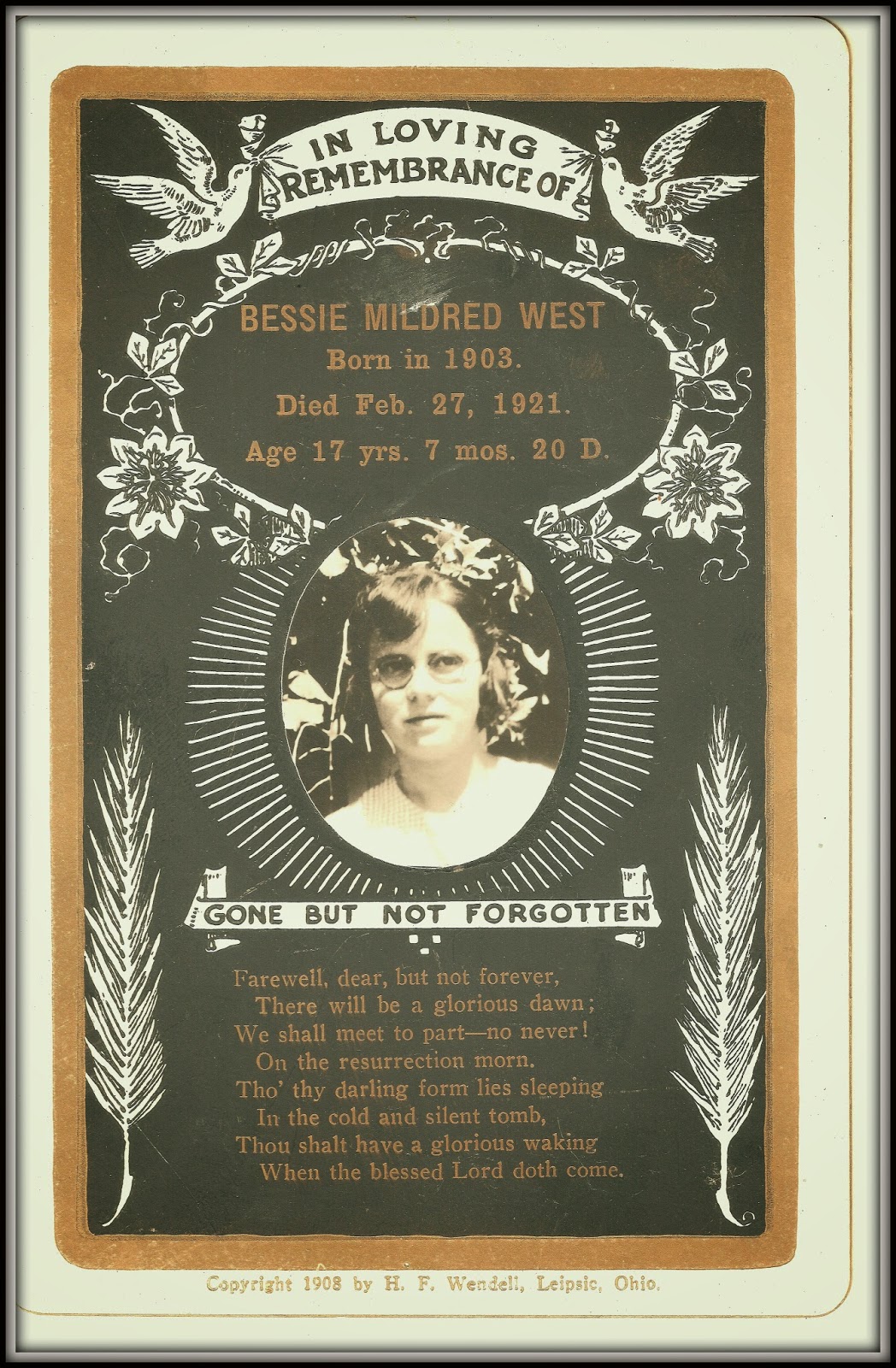