The Oregon Trail from MIssouri

My mother, Frances  West transcribed a letter written by my great grandmother, Olive West which was published in the Boomerang in the fall of 1994 and is an account of my great-great grandmother’s family (Mariah Hulbert McConnel) as they journeyed west from Missouri. My mother kept it as close to the original letter as possible.  My grandfather also wrote a series of articles about the McConnells. This is my great grandmother Olive's account:
My father, William McConnell was a thrifty farmer living in what was then the new state of Missouri, which soon became a slave state. If a man needed help on his farm he went to a big slaveholder and hired a slave from his master. The money the slave earned was paid to his master. It was the same with the help in the house.
At the age of 30, he married my mother Miriah Hulbert. Miriah had four sisters and two brothers, one named Wallace Hulbert, who later became one of the first ministers in Oregon.
About the time the youngest Hulbert child was born the War Between the States was just over. My grandfather Hulbert didn’t like living in a slave state and after his oldest daughter, Mirah, my mother, married William McConnell he left Missouri taking his other six children. He crossed the plains to the new country just opening up….Oregon. Their last child was born on the plains on the banks of the Blue River, and they named her Ellen Blue after the place where she was born.  He settled in the Willamette Valley, about 1851. I am not sure of the exact date, but they were among the first settlers.  They started their new home in the neighborhood of what is now Corvallis.
Meanwhile, the slaves were set free back in Missouri, and everyone that was able to raise enough to prepare for a long journey across the plans sold out for what they could get and joined wagon trains going west.  Missouri was war-torn and living conditions were nearly intolerable. About that time an epidemic of cholera swept the country and many of the little children fell victim.  My mother, (who had remained in Missouri) received a letter from her parents the Hulberts in Oregon telling of the mild climate and the fruits and vegetables they could raise.
So my parents then began making plans to leave the country and head west for the Oregon valley. Before they could leave their small son Wallace died of cholera and was laid to rest in the orchard of their home.  The home was turned over to a good friend who was remaining in that country, who afterward bought it for half of what it was worth.  But they knew the little grave they left behind would always be respected.
My father sold all his horses and mules and bought oxen and three big wagons.  One was especially for the family and was made as comfortable as possible.  One was loaded with food consisting of cured bacon, flour, dried fruit and honey enough to last until they were able to raise a crop in the new country.  One wagon was for farm implements and tools.  Now they were ready to start but must wait until there were three hundred wagons ready to go.  Any less was not safe on the plains as the Indians were on the warpath.  At the time when the white men fought among themselves, the Indians grew dangerous. It was thought the Indians were encouraged by the Europeans but this was not certain.
When the journal finally began the youngest child was three months old and the oldest was 16 years. They started in February and arrived in the valley in September. What happened along the way would fill a good-sized book, but I can only record what I heard my parents tell.  The wagons were covered and a young man with a wife and one child drove the wagon of provisions. A young Englishman who had worked for Father decided he would go along and drive the wagon of farm tools.  Each wagon was hauled by six yoke of oxen and they had a milk cow they yoked up with the oxen.  They also had two young horses. Every outfit had a horse or two as the oxen had to be herded when they stopped for grazing. 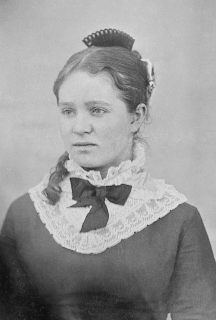 Mother had a real heartbreaking time when she finally was united with her folks, the Hulberts. Messages between the two families were few and far between, so she hadn’t heard that her mother had died and her father had remarried. Her youngest sister Emily had also died.  She saw for the first time her sister Ellen Blue.  Mother was grief-stricken, but the pioneers were made of stern stuff. She could not take time out to grieve, for winter was coming and they had to settle into a farm that father had rented. They put the children in school and the next two years were busy ones.
It was about this time that I was born.  Two years later another boy, James was born. Mother was then 42 years old.
Father then bought a 300-acre farm nine miles north of Eugene and when I was three weeks old we moved in. I lived on that farm for 21 years. My mother Miriah made all my father’s clothes, even his coats and pants and knit all the sock for the family, including the boys’ until they grew up big enough to rebel and get their “boughten” clothes themselves.  She ground all our coffee, made all the soap from ashes taken from the fireplace and mixed with lard.  We girls were taught to wash dishes at seven years old and to churn butter and cook and sew.  We had to do most everything around the house, as mother became a semi-invalid after she was 50 years old. She raised nine children to adulthood except the boy who died in Missouri.  Many of these children became pioneers of the Palouse country. A number of their descendants still live there.  She died an old woman at72, and father at 77. She is buried in the Palouse cemetery plot with her daughter Louise.
Well my story is done. When you read this and see some mistakes I have made please remember that today is the 18 of April 1952 and I am 85 years of age.

Olive McConnell West
Posted by sharono360 at 2:35 PM No comments: