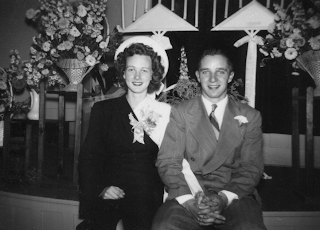 My dislike for dancing began at the age of 5, when we were living in Post Falls, Idaho. At least once a month my parents attended a dance at the Grange Hall. There was no money for a babysitter so I was forced to go with them. It wasn’t much fun for a kid of my age to have to sit all those hours and watch his parents make fools of themselves.

After we moved to Palouse, Dad joined the American Legion. They held their meetings in a building on West Main Street, originally built as a hospital by Dr. Hein in the early 1900s. Upon his retirement, the building became the community center for the city. Once a month the Legion held a potluck dinner meeting followed by an evening of dancing, music being furnished by three members of the club. Once again I had to suffer through an evening of dance. There were several boys and girls there to play with, but sooner or later our parents complained of the noise we made and we had to sit the rest of the evening. We boys agreed the dancing was the most stupid thing in the whole world. Some of the girls actually danced with each other! I always knew girls were crazy, this was definite proof. I made up my mind I was never, ever going to learn to dance.

In the spring of 1941 I was dating a cute sophomore girl. I knew she was expecting me to ask her to the social event of the year – the Junior Prom. This event, of course, involved dancing, of which I still had a low opinion and had never learned how. Against my better judgment, I asked her to be my partner. What a terrible mistake that was! This had to be the longest, most horrible night of my young life. She had completely filled her dance card and I had to dance every dance. As much as I suffered, I know the girls suffered more through my feeble attempt at dancing. Would this evening ever end? Thank Heaven at the stroke of midnight the band played “Goodnight Sweetheart, Until We Meet Tomorrow”; signaling the evening was finally over. Alas! There was no tomorrow for us. She would never go out with me again. She never told me why, but I knew it was because of my lack of skill on the dance floor.
The following spring I fell in love with another sophomore girl. Then came prom time. Did I dare run the risk of losing another girlfriend by asking her? On the other hand, I might lose her if I didn’t. A ‘damned if I do and damned if I don’t’ situation. I knew that this romance was very strong and could endure anything. So I took a chance and asked her.

I had one way to dance. With my right arm around my partner’s waist and hers around mine, we would step-step-step-hop around the perimeter of the dance floor. About every third trip we would cut diagonally across the floor, make a 90-degree turn to the opposite corner. In other words, we were O-ing and X-ing around and across the gym floor. I was right, our romance survived, but I was sure it could not survive another night like this. It did. We attended the harvest ball on the WSC campus that fall. It was much like the prom but was held in a much larger building, Bohler Gym, requiring making much larger Os and Xs. Since our relationship endured these two horrible nights, I thought it would last into eternity. This time I was wrong. I entered the army the next January About a year later I was crushed when I received a “Dear John” letter. I don’t blame this breakup because of poor dancing. It was the result of the opposite meaning of the old proverb, “Absence Makes the Heart Grow Fonder.”

I was discharged at Ft. Lewis in Jan. 1946. On the train ride home from the coast I told myself I was going to date every pretty girl in my old hometown. I certainly wasn’t going to fall for the first girl I dated. (I did, however, and married her in September 1947.) I had my heart broken once before by local lass and I certainly didn’t want to go through that again. On the first Friday I was home, my cousin Don Batten asked me to go to a basketball game with his girlfriend and a girl he had picked out for me. Frances was my date. I remembered her as a tall, skinny 13-year-old teenager. Boy, was I ever surprised! She had grown into a very beautiful young lady with a winning and witty personality. I didn’t realize it at the time, but I had fallen for her hook, line and sinker. By May we were going steady. One day she popped the question. No, she didn’t propose to me, she asked me to be her date for the prom.

Another DIID and DIID situation. Without telling her I was the world’s worst dancer, I accepted. I was conceited enough to think the honor of having me be her escort would overcome my only fault. I was a young, handsome, brave, highly decorated (good conduct medal!) veteran of World War II. I had plenty of money to spend on her, and a high paying job ($200 a month working for my dad) and best of all we would be arriving at the ball in my recently purchased 1941 Chevrolet convertible. What more could a young lady want? I soon found out. After the third round of hopping around the dance floor, she told me if I didn’t improve my dancing she would never date me. I knew she meant it, so I asked her to teach me. She was an excellent instructor and I soon learned. This was my beginning of my love for dancing.
We began our dancing at the large round hall at Riverside Park near Potlatch. It was here our longtime friendship began with Perry and Dixie, who like us, loved to dance. We danced to the music of well-known western stars, T. Texas Tyler, Tex Ritter and Marty Robbins. Our favorite band was a local band directed by Ken Holway, music instructor for the school for many years. Members were his son Tom, Don Billings (Elizabeth Schell’s brother) and Dick Eicher, who became a star basketball player at E.W.S.C.
Joyce Walser was the songbird of the group. Ohhhh, how she could sing! All the band members, including Ken, were either students or graduates of Palouse High School. Other favorite dancing places were the Log Cabin in Potlatch and the “Y” Inn, now the Lone Jack Steak House. We spent many Saturday nights jukebox dancing in the Legion Club above the City Hall.

We enjoyed several years square dancing with my lifelong friend Eugene Schell and his wife Elizabeth. We joined two square dance clubs and danced at least twice a week. We took time out for the birth of our son, intending to return later, but we never did. The Schells enjoyed dancing and teaching western dancing until his untimely death in 1989. He became one of the more popular callers in the Inland Empire.
Later on we returned to what we fondly call our “Honky Tonk Days”. Over the years our favorite dancing places have disappeared. The Round Hall suffered severe flood damage and was torn down. The Log Cabin closed its doors to the public and the “Y” Inn is now a restaurant. These closings limited our dancing to an occasional dance at one of the two taverns in town and two social events the Palouse Lions held every year. Things got worse. One tavern closed and the other one seldom had live music. Membership in the Lions Club dropped and the parties were no longer self-supporting, so bands were no longer hired.

At the last Lions Club dinner and dance party, I realized Father Time was hinting to me it was about time to retire my dancing shoes. I hated to admit it, but it was. For many years I danced nearly every dance of every set. The only ones sat out were the extra slow ones. These were the dances the “I hate to dance” men danced their duty dances. I hated the intermissions; they were cutting into my valuable dancing time. At closing time, I begged for just one more song. My favorite song was “I Could Have Danced All Night.” At this last dance I danced most of the pieces for several sets but I was enjoying the once-hated breaks. A little before 11 p.m. I asked Frances if she was ready to go home. She nodded yes. We sneaked out the back door. I didn’t want to admit that I was getting too old to cut the mustard anymore.

We had in our group of friends one of these duty dancers. Toward the end of the evening as I brought his wife back to the table, he would slowly shake his head back and forth and say to me, “You crazy old fool, one of these days you are going to drop dead on the dance floor.”
Could be. Nice way to go!