From South to West

The year was 1885. Grover Cleveland was President and the Depression of 1882 was over.  It was still the Gilded Age, the period following the Civil War, roughly from the end of Reconstruction in 1877 to the turn of the twentieth century.  The Gilded Age (a phrase coined by Mark Twain) was a period of widespread economic growth as the United States jumped to the lead in industrialization ahead of Britain and was rapidly expanding its economy into new areas, especially heavy industry such as factories, railroads and coal mining. But the economy of the south was lagging so people went to the north and west to seek change and a new life, my grandparents among them.

My maternal Grandmother Anna born in the south, the oldest of the four daughters born to George Washington Payne and Lucy Ann Sivils. Anna B Payne was born in Warrensburg, Missouri on March 17, 1885. There was already a family, as George’s first wife, Mary died in the fall of 1882 at the age of 22, leaving behind two little boys John age 2, and William Joseph, age 1. George married  Lucy in 1884 when Lucy was 27. The family story is that George told Lucy he was marrying her because he needed a mother for his children and that he kept a picture of Mary above the bed. I would imagine he was still grieving. There was also another child from the first marriage  Rosey May;  who according to an 1880 census in Missouri was adopted, and was quite a bit older than John and didn’t came out west with the rest of the family. Family records show that she married the younger brother of Lucy Ann in 1889 when Anna was a young child.

Anna spent her early childhood in Missouri where her sister Nellie May was born in 1887, followed by Mary Frances in 1888 and Polly in 1889.  On April 1, 1896, when she was 11 Anna migrated by train with her family of six from the ages of 16 to 6  to Rufus, Oregon, a small town in the Columbia Gorge, 24 miles from the Dalles.  According to the family story, Anna said, “We got off the train at Rufus, OR and Uncle Frank met us with a big wagon. Our dad was so disappointed said if he had the money he would have gone back to Missouri.”

Six years later at the age of l7 Anna met and married Thomas Job Simon in Rutledge, OR on March 23, 1902. Thomas was 23.  The young couple made their home in Oregon where their first son, Ira Virgil was born December 20, 1902 in Grass Valley and their second son, Alva Ivan was born in Brooks five years later on October 29, 1907.


In 1911 Thomas and Anna moved from Oregon to the prairies of Alberta, Canada to try their hand at acquiring some land and livelihood. The nearest city was Calgary. According to the Dominion Lands Act, which was similar to the United States Homestead Act, family or person over 18 years of age could acquire 160 acres of land free, (except for a small registration fee.) Any male farmer who agreed to cultivate at least 40 acres and build a permanent dwelling on it within three years qualified. The term was “proving up the homestead.”  The Simons became Canadian citizens in 1914.

According to what my grandmother told my mother, life on the prairie for the next few years were hard on Anna. As a young mother she missed her family and felt isolated living so far away from civilization.  In a census in 1916 they lived in near Bow River in Cypress County, Alberta.  Thomas was gone a lot, working with his team of horses for neighbors.  Anna took in school teachers as boarders.  At one point she cared for a little boy whose name was Teddy. In those days it was common for parents to board their children at friends and neighbors so they could travel elsewhere and earn money. After two years Anna became attached to Teddy and was sad when his parents came to get him. When her mother Lucy died in Oregon in June of 1917 Anna was unable to attend her funeral because of the expense and the distance.  Anna nearly died of typhoid fever in the mid 1900’s. Anna gave birth to their first daughter, Nellie Harriet, in February of 1918. There were 11 years between Nellie and her brother Ivan. 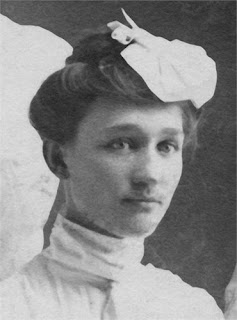 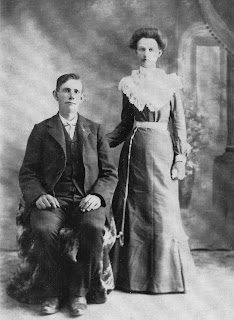 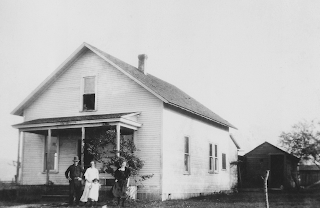 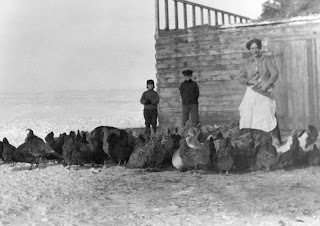